The city of celebrations since ancient times, Lemesos (Limassol) continues its status as the festive centre of the island to this day and is vibrant and lively, yet also provides all the elements for a relaxing beach break, or an unhurried expedition of historical discovery.

From the wedding of Richard the Lionheart and the feasts in honour of ancient deities, to today’s carnival celebrations and Wine Festival, Lemesos has always attracted visitors in their flocks for its exciting events and social revelling.

Its position between two large city-kingdoms of ancient times - Amathous and Kourion - has blessed the area with a significant archaeological status, whilst the town in between is modern and diverse with a range of coastal strips, shopping options, drinking, dining and entertainment.

And Lemesos has the added bonus of being the island’s maritime capital, thanks to its main commercial and business port, and the exclusive, modern marina where both residents and visitors alike can enjoy sea views at one of the many waterfront establishments.

As its rural areas stretch upwards to the mountains, some of the island’s main winemaking villages can be found, giving the Lemesos region its unique link with the age-old tradition of viticulture.

For a voyage of cultural discovery and celebration, combined with sand, sea and mountains, Lemesos offers an experience not to be missed.

Legends of kings and kingdoms, and the origins of the island’s wine making industry characterise the Lemesos (Limassol) region, which embodies both the ancient and the modern.

Known as the region of wine, celebrations and ancient realms, Lemesos is comprised of its main city - which sits between two important archaeological sites; the ancient city-kingdom of Amathus to the east, and the ancient city-kingdom of Kourion to the west - along with rural areas and charming mountainous villages, where old traditions and crafts are still practised.

Lemesos is the second largest city of Cyprus, the home of the island’s main port, and a bustling holiday resort. From its jewel of a marina and impressive archaeological monuments, to the vast 15 km coastal strip lined with restaurants, bars, cafes, shops and entertainment establishments, the main city is thriving and colourful.

The region also encompasses two unique wetlands. Germasogeia Dam is a peaceful place to relax, take a stroll, or enjoy a spot of angling, whilst Akrotiri Salt Lake is perfect for observing nature and wildlife (especially birds). The environmental significance of the Salt Lake and its surrounding area are showcased at the new installations of Akrotiri Environmental Centre.

The region then trails up the sun-kissed southern slopes of the Troodos mountains, with vineyards forming a pleasant green backdrop to the city. The hillside villages here are known collectively as the 'Krassochoria' (or wine villages), and keep their old traditions of viticulture alive, producing the island’s best wines even today, and especially one of the oldest named wines in the world – the sweet dessert wine of Commandaria. Here, visitors will find a tranquil, rural retreat where hiking and cycling can be enjoyed in the unspoilt countryside. 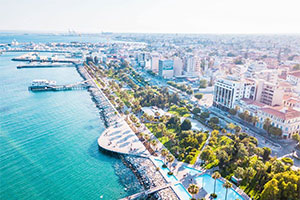 Kourion was an important city-kingdom in antiquity and stands as one of the most impressive archaeological sites in Cyprus. Its theatre - located on the southern end of the abrupt hill on which the city is built - is of great significance.

The theatre was constructed at the end of the 2nd century BC, but took its current dimensions during the 2nd century AD. Consisting of a semicircular orchestra that is surrounded by seats of the cavea (subterranean cells), it was enclosed to the south by the building of the scaenae frons (façade) that must have reached the height of the cavea, though today only the foundations remain. 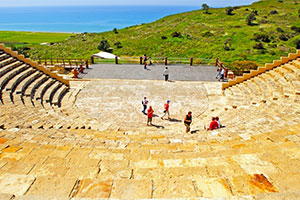 Amathous is one of the significant ancient city-kingdoms of Cyprus where, according to mythology, Greek hero Theseus left the pregnant Ariadne to be attended by local women. It was also an important site of worship of the Goddess Aphrodite-Astarte.

There are various, rich archaeological finds at the site, including the Agora, the public baths, the Temple of Aphrodite, early Christian basilicas and several tombs. 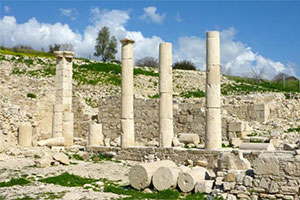 Lemesos (Limassol) Medieval Castle is situated in the heart of the old town, just above the old harbour. According to tradition, this is where Richard the Lionheart married Berengaria of Navarre and crowned her Queen of England in 1191. The fortified walls are of considerable archaeological interest and thought to be fragments of a much larger castle.

The exact date of the fort’s construction is not known; according to Etienne de Lusignan, it was built in 1193 by the founder of the Lusignan dynasty, Guy de Lusignan, but the first official reference to the fort dates to 1228, during the involvement of Frederic II of Germany in the affairs of Cyprus.

Throughout the years, the fort suffered the assaults of many invaders, sustaining further damage in the earthquakes of 1567 and 1568. Finally, in 1590, the Ottomans rebuilt the fort in its current form. The original fort was larger than the later one, which incorporates some parts of the former building, such as the two oblong halls of the ground floor. Below the eastern hall there is a basement with cells, which was used as a prison until 1950. Today, the fort houses the Medieval Museum of Cyprus. 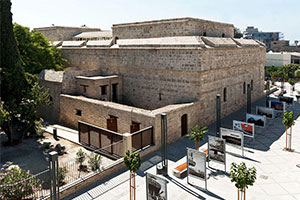